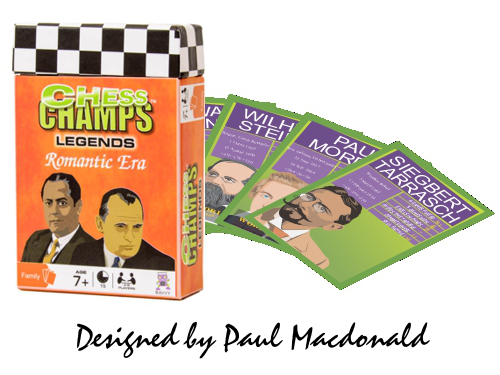 The most exciting period of Chess, Romantic chess was the style of chess prevalent from the late 15th century until the 1880s. Chess games of this period emphasized more on quick, tactical maneuvers rather than long-term strategic planning. Chess Champs Romantic Era contains all the great Chess legends from 1530 - 1906 including Gioachino Greco, Alexander McDonnell, Louis-Charles Mahé de La Bourdonnais, Howard Staunton, and other leading players of the era included Adolf Anderssen, Henry Bird, Louis Paulsen, and Paul Morphy.

The Cold war era highlights the Soviet Chess School's long held monopoly on the game at the highest level. Boris Spassky was the latest in an uninterrupted chain of Soviet world chess champions, stretching back to the 1948 championship. This era culminated in what became known as "Match of the Century" - the most watched Chess World Championship in history between the Soviet, Boris Spassky and the American, Bobby Fischer.

The modern era is centred around the brilliant Kasparov who became the youngest ever undisputed World Chess Champion in 1985 at age 22 by defeating then-champion Anatoly Karpov. This edition features Kasparov's key rivals including Anand, Kramnik, Ivanchuk, Kamsky and Leko. Many consider Kasparov to be the greatest chess player in chess history. Kasparov continued to hold the "Classical" World Chess Championship until his defeat by Vladimir Kramnik in 2000. In spite of losing the title, he continued winning tournaments and was the world's highest-rated player when he retired from professional chess in 2005.

The Millenium Edition is about a new generation of modern chess players led by the World Champion Magnus Carlsen. Carlsen has dominated world chess in all forms of the game. Carlsen's style is unforgiving as he constantly puts his opponent under pressure and maximises minuscule advantages. A new generation of players are rising through the ranks to challenge Carlsen such as Aronian, Caruana, Nakamura, Grischuk, So and Mamedyarov. In addition, for the first time, we witness the emergence of China as a new force in top-level Chess with players like Ding Liren, Yu Yangyi, Li Chao b and Ju Wenjun. India is also making it's presence felt and we feature the super-strong Pentala Harikrishna.

Find details of all the players and their strengths at www.chesschamps.info.